As a genealogist, you get comfortable with the repositories you visit often – the local historical society, the town library, the county courthouse. But few families stay in the same place their entire lives. That’s why a trip to the Pennsylvania State Archives was on my list. I needed to research original microfilmed Franklin County tax records for a client. To make the two-hour round trip to Harrisburg more interesting, I invited a friend, Michele Wade. As an added bonus, she agreed to let me post her article on researching at the archives. Below is part one of her ancestor’s story.

Tracking the Criminal in My Family Tree – Part I

My father is always bringing me various papers and photos that he knows will help in researching our family.  One day he gave me a postcard addressed to my great grandfather, from nephew Wayne.  The uniqueness of the postcard was because Wayne sent it from prison.  Due to the postcard we knew Wayne had spent time incarcerated, but I was curious about what he had done to end up in prison.  A few years later we came across an old letter from Wayne to his brother asking for money to hire an attorney to defend him in court.  He said that if he doesn’t succeed in his defense he would be returned to serve the eight years of his parole.  This led me to believe that it was a significant crime Wayne committed to have to serve eight years in prison.

Honestly, I had no idea how to research a criminal conviction.  I have to admit, thankfully, I am pretty clueless about the criminal justice system.  From the postmark on the postcard I did know Wayne was incarcerated November 9, 1943 in Graterford, Pa.  A quick search of the internet let me know there was a Graterford Prison, better known as Eastern State Penitentiary, near Philadelphia.  Built in 1929, it is Pennsylvania’s largest maximum-security prison.  That raised my curiosity even more…what did Wayne do?  The next clues came from the letter that actually was dated earlier than the postcard.  The letter is dated September 17, 1938, and Wayne sent it from Harrisburg, Pa. 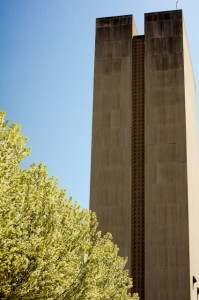 In February, Pam Anderson from Anderson Construction & Genealogy Services invited me along to tour the Pennsylvania State Archives, with some research time after the tour.  I checked out the State Archives website before we went and happened to see they have state penitentiary records.  On a Wednesday morning we met Mr. Aaron McWilliams, Reference Archivist, for a tour.  The tour gave us an overview of all the information available at the Archives and how to do research there – a very worthwhile tour.

[Thanks to Aaron for providing the photo, taken by Joshua Stahlman, an archivist at the Pennsylvania State Archives.]

After the tour, Pam settled in with the microfilmed tax records and Aaron helped me start my research of Wayne.  Based on the letter dated September 1938, we pulled the microfilm of Eastern State Penitentiary’s intake records.  So while I looked through 1937-1939 intake records, Aaron looked to see if he could find any commutation records.  These are records of inmates petitioning the court to have their sentences reduced or commuted.  These records would have detailed information about Wayne’s sentencing. I had no luck finding Wayne in the 1937-1939 intake records.  However, Aaron came up with a copy of a card where Wayne asked for a hearing with the court. Unfortunately for him, the court refused the hearing.  Fortunately for us, the card gave us the date Wayne made his request which was May 1936.  This date was earlier than we were looking at in the prison records.  So I started hunting earlier on the intake records.  Bingo! Wayne arrived at Eastern State Penitentiary on December 29, 1934, and his inmate number was D-260.

Back to the microfilm to pull the sentencing records for Oct. 4, 1934. With each new find, we got more and more information about Wayne.  The sentencing records told us Wayne was convicted of “Larceny, Receiving Stolen Goods, and Felonious Entry”.  He was sentenced to not more than twelve years nor less than three years.  The earliest Wayne could leave prison was October 1937; he must serve the three-year minimum.  I was thrilled to finally know the how and why Wayne ended up in Graterford Prison.  I couldn’t wait to get home and tell my father.  Dad always wondered about that prison postcard.  I thought I had completed my research.  Surprisingly we were just getting to the good stuff.